In June 2014, 10 men signed up for a 6-week career training program with the goal of securing stable jobs in construction. By week 3—after hands-on training and interviews to determine their skills and interests—all 10 men walked into job interviews with local construction companies and walked out with job offers in hand. At the time, the men were awaiting release from correctional facilities throughout Milwaukee, Wisconsin.

Arn Quakkelaar—executive director of Milwaukee-based nonprofit Brothers and Sisters in Christ Serving (BASICS), which focuses on rehabilitating people returning to their communities after incarceration—and the rest of the BASICS team threw the men a graduation ceremony to celebrate the group’s successful completion of BASICS’ Bridge Program, a pre-release program which provided the men with professional development at the organization’s facility during their final weeks of incarceration.

“We can do a lot to keep people out of prison, and it starts before they’re even released” Quakkelaar said. “The value of hard work in developing an individual’s self-worth cannot be overlooked.”

The Bridge program is one aspect of a five-stage process developed by BASICS to target the specific needs of people returning to their communities after incarceration. Each stage is designed to provide BASICS clients with different tools to help them thrive in their communities after their release, ultimately helping them secure stable housing and career-oriented jobs and surround themselves with supportive relationships.

“So many times these people come out of prison and go right back into their old neighborhoods and get into the same relationships that led them into criminal behavior,” Quakkelaar said. “We want to stop that. Our passion is not just to see the system change, but, more importantly, to see people change, to reunite families, rebuild lives, and to build up the workforce as well.”

BASICS—a multi-denomination, faith-based organization, and FY2012 and FY2013 recipient of Second Chance Act grants—launched its efforts to assist people formerly involved with the criminal justice system four years ago as a response to what Quakkelaar calls, “the greatest problem that [Milwaukee] faces—crime and the disenfranchisement of vulnerable people.”

Part of the answer to that problem, Quakkelaar believes, is rooted in rehabilitation.

‘The Dimension of Hope’

Although not a new concept, rehabilitation took the spotlight during portions of Pope Francis’s recent visit to the U.S., when, in his address to a joint session of Congress in September, he offered, “encouragement to those who are convinced that a just and necessary punishment must never exclude the dimension of hope and the goal of rehabilitation.”

Pope Francis capped off his visit with a tour of the Curran-Fromhold Correctional Facility—Philadelphia’s largest prison—where he spoke to inmates, offering solidarity and support during their incarceration.

For faith-based organizations like BASICS that are working to reduce recidivism, the pope’s support of rehabilitation draws their work more prominently into the public eye. The concepts of hope and dignity that Pope Francis discussed throughout his visit are principles upon which all of BASICS’ work is based, Quakkelaar said.

“We have all been created to have value and purpose in life—when you take away a man or woman’s dignity, they feel they have no value whatsoever,” Quakkelaar said. “Pope Francis recognizes that. He has been with the poor, he knows what their conditions are and how desperate they become when they lose hope in their fellow man. It’s a responsibility of the American people to recognize that we need to change the criminal justice system to be more oriented to the value of people.”

‘A Second Chance at Life’ 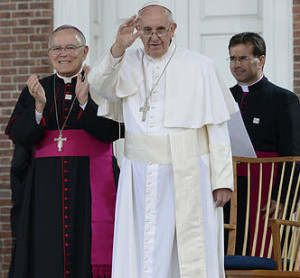 Pope Francis waves to a crowd of admirers during his recent visit to Philadelphia.

Pope Francis’s visit coincided with another national conversation regarding reentry—the potential passage of the Second Chance Reauthorization Act of 2015, which was introduced to the U.S. House of Representatives in July.

The bill would extend the Second Chance Act (SCA), first signed into law in 2008, which provides state and local governments and community-based organization across the country—like BASICS—with the resources to improve the success rates for people released from prison and jail.

“The timing of the pope’s visit puts the spotlight on the crucial area of reentry as a way of conveying that these people are down, they’re looking for a second chance at life, and we have an opportunity to help them make the most of it, and make our communities safer as a result,” Quakkelaar said. “Hopefully this message will prompt Congress to reauthorize the Second Chance Act, which is the one step it can take immediately to combat recidivism in a way that the Pope would support.”

The reauthorization would expand the number of grant programs available and would promote increased accountability and outcomes from grantees.

Since its implementation in 2008, SCA grant programs have provided support to more than 90,000 adults and youth returning home from prison, jail, and juvenile facilities.

“We don’t call them ex-cons or felons,” Quakkelaar said. “We refer to them as returning citizens, because, ultimately, that’s what we want them—community members who have returned home.”