For LA’s Chronically Homeless, Recovery Is ‘Just In Reach’

The top 10 percent of users of all public services in Los Angeles are people who are chronically homeless, repeatedly involved with the criminal justice system, and also have a diagnosable illness such as HIV/AIDS, mental illness, or addiction, according to a 2009 report by the Economic Roundtable. Many of these individuals repeatedly cycle through service providers without receiving long-lasting or specialized treatment.

For Doug Bond, director of California Services and Operations at the Amity Foundation—a nonprofit focused on reentry and the treatment of individuals with substance use disorders—the solution to this revolving door for vulnerable populations is about more than enrolling an individual in whatever services happen to be available. It’s about asking the right questions and basing services on people’s needs. 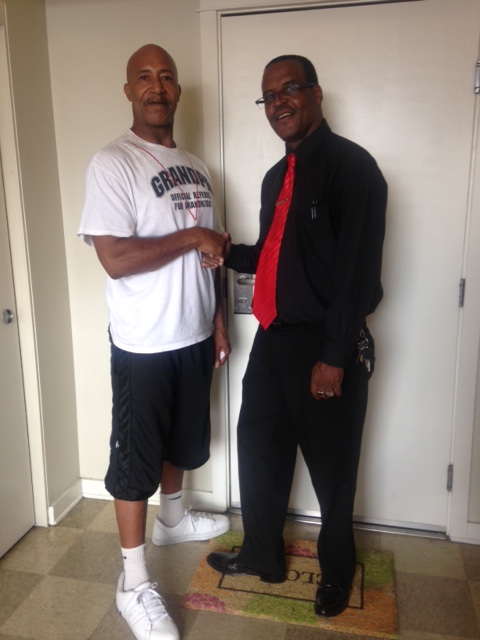 Lowell Jones (right), Housing Specialist at the Amity Foundation, celebrates a successful housing placement with a Just In Reach client.

With these and other questions in mind, in 2006 a collaborative of local agencies and nonprofits, spearheaded in part by the Amity Foundation (whose Los Angeles-based reentry program, Amistad de Los Angeles, is a FY2014 Second Chance Act Mentoring grant recipient) came together to address the needs of this chronically high-need population in Los Angeles. The result was Just in Reach (JIR), a reentry model focused on achieving a level of service integration for its target population that aims to eliminate people falling through the cracks.

“We took the strengths from each agency and built the collaborative,” Bond said.

The level of service coordination among JIR partners creates better-targeted care for the vulnerable populations served. Through pre- and post-incarceration services, JIR creates a stable environment in which goals such as employment and family reunification can be built.

Utilizing Mentorship Upon Reentry Peer mentoring, one of the reentry services provided by the Amity Foundation, plays a “critical” role in the overall success of JIR, helping clients feel supported upon their reentry, according to Juana Ochoa, mentor coordinator at Amistad de Los Angeles.

“It creates an opportunity for people reentering the community to feel a part of something,” Richards said. “You can see the glow of hope being created by knowing that they have a person they can rely on.”

For many staff members at the Amity Foundation, the importance of mentorship is personal.

“I’ve had amazing mentoring in my life,” Bond said. “[Without it] I wouldn’t be where I am today.”

Many of the staff members at Amity have similar histories and backgrounds to the clients they serve, including Richards, who is an Amity program graduate.

“I had an opportunity to do something different,” he said of his experience as a client at Amity. “I was given information and direction that helped me get my life back together.”

For many of Amity’s clients who have no support network waiting for them upon their release from jail, mentorship immerses them in family-like environment that can address the need for positive social connections.

An Eye on Sustainability The results of the collaborative so far seem promising. JIR houses more than 100 high-risk individuals in its transitional housing facilities and—according to program partners—preliminary data from researchers at the University of California, Los Angeles, who are currently doing a robust evaluation of the program, suggests a far lower 24-month reconviction rate for participants than that for the general population released from Los Angeles County detention facilities.

There are fiscal benefits, too. The high utilizers of social services are estimated to cost the community $68,000 per participant per year, compared to $20,000 per participant for a year in JIR services. Because of this success, Bond said statewide expansion might be in JIR’s future.

Criminalizing low-level offenders is also an issue that needs to be reassessed, Richards said.

“Many of those people would do better in some type of community-based program instead of cycling in and out of county facilities,” he said.

JIR is one of a few programs being considered as a Pay For Success model to be implemented statewide by the California Board of State and Community Corrections, a designation that would boost JIR’s sustainability.

There are also, he added, immeasurable benefits.