Circles of Support and Accountability

The Circles of Support & Accountability (CoSA) model focuses on the safe reintegration of people returning home from incarceration—usually high-risk, high-needs people convicted of a sexual offense.

These “circles” are volunteer-driven. The volunteers establish relationships with core members (i.e., the person who was convicted of a sex offense) that are based on mutuality, equality, and an agreement (i.e., a “covenant”) to work toward building a lasting and responsible friendship. The exact models can differ depending on the location and needs of the jurisdiction, but CoSA models primarily include a group of volunteers who meet with the core member weekly and discuss the various challenges of reentry. Community professionals are also essential to ensuring these projects are running effectively; they provide training and support to volunteers while also holding core members accountable to their commitment to the project.

CoSA adheres to the principles of risk, need, and responsivity (RNR), and is used to help reduce a person’s likelihood of reoffending, thereby increasing public safety. When implemented correctly and consistently, RNR principles help staff focus resources to where they will have the greatest impact on reducing recidivism and meeting the needs of people released from prisons, jails, and juvenile facilities. 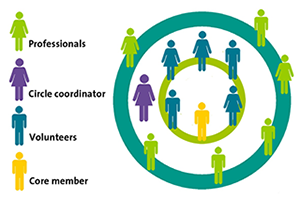 Core Member: Person who has been convicted of a sex offense

Volunteer: Local members of the community, often drawn from the faith community

Inner Circle: A collection of one core member and four to six volunteers

Circle Coordinator: A liaison between the inner and outer circles who recruits and organizes volunteers

Outer Circle: Professionals volunteering to support the CoSA project. The members of this outer circle:

1. Where does the CoSA concept originate?

The CoSA model can be traced back to both aboriginal Canadian traditions and to United States Native American traditions. When they wanted to solve a problem, everyone needed to sit in a circle, face each other as equals, and talk about it. It was, and is, a powerful example of people working together as a team. The first CoSA was implemented in Hamilton, Ontario, in 1994. This movement was started by Mennonite Pastor Harry Nigh, who befriended a mentally disabled sex offender who had served time in prison for sexual offenses throughout his lifetime.

2. What are the key values of the CoSA model?

The CoSA model is driven by the following set of key values: (1) no one is disposable; (2) no one does this alone; (3) no more victims; (4) the community is responsible for its victims and those who offend against them; and (5) health and safety are among the primary concerns of the community.

3. How does the CoSA model help facilitate public safety?

People who decide to be CoSA volunteers participate in the first step of increasing public safety by choosing to be active participants in protecting the community and helping to lessen the chances that someone who was previously convicted of a sex offense reoffends. These participants understand that public safety is not just the responsibility of the police (and those in authority) to enforce, but also of the people in the community.

4. Is participation in CoSA voluntary for core members?

Yes. Core members must choose to participate in CoSA. However, their reasons for participating can vary. CoSA is about making an impact on people who are likely to engage in behavior that puts others—or themselves—at risk by showing them that they have the support of their community. That positive impact cannot be made if a core member participates involuntarily.

5. Do I need special certification to be a CoSA volunteer?

No. Regular members of the community choose to volunteer as participants of CoSA. The model, as it was first conceived, was designed to pair a person who offended with a group of people from his or her community. A volunteer just needs to be willing to commit to treating CoSA as a covenant, i.e. a moral agreement, not a contract. Volunteers are, however, screened and provided with training.

6. What are your responsibilities/expectations as a CoSA volunteer?

The role of a volunteer is to provide support to and assist the core member in making good decisions through mentorship and discussion. Expectations for volunteers include attending meetings, as well as any required trainings, which will vary across projects. More information about volunteering in a CoSA can be found here.

People who are convicted of sex offenses have the same range of problems as the rest of the people who are part of reentry population, such as difficulty securing housing, limited employment and educational opportunities, and potential for substance use and mental health concerns. However, for people convicted of a sexual offense, these obstacles are also often compounded with additional barriers, including limited access to prosocial activities and restrictions on reuniting with family, among others.

Dr. Robin J. Wilson, ABPP, is a researcher, educator, and board-certified clinical psychologist who has worked with people who have sexual and social behavior problems in hospital, correctional, and private practice settings for more than 30 years. His current research and advocacy interests are focused on collaborative models of risk management and restoration as people of risk are transitioned from institutional to community settings. He is a long-time participant in the Circles of Support & Accountability (CoSA) model of wrap-around care and intentional community for people who sexually offend and who are at particularly high risk to reoffend.

Click on the icon in the top left corner to see full playlist.

Dr. Wilson has published more than 100 scientific articles, book chapters, and other monographs, and has presented internationally on the diagnosis and treatment of social and sexual psychopathology. In collaboration with the CSG Justice Center, Dr. Wilson has provided support and technical assistance to two recipients of Second Chance Act awards with programs focused on the implementation of Circles of Support & Accountability (CoSA) in their states (Vermont DOC and Colorado DOC).

The Council of State Governments (CSG) Justice Center’s Circles of Support and Accountability Project is supported by the leadership and support of the U.S. Department of Justice's Bureau of Justice Assistance and the Office of Sex Offender Sentencing, Monitoring, Apprehending, Registering, and Tracking (SMART) .