SCA Grantee Discovers New Way of Policing by Asking Women Involved with the Justice System ‘What If?’

For Seattle Police Department (SPD) Detective Kim Bogucki (below), there is a stark difference between enforcing laws and policing. 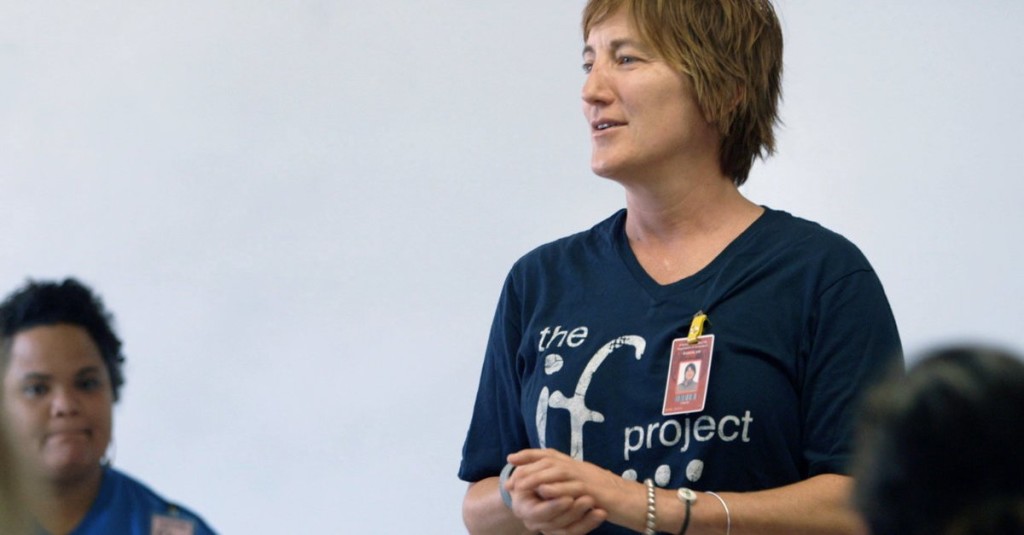 “The phrase ‘law enforcement’ pigeonholes the enforcement, but policing is about being a public servant and actually has to do with way more than just putting handcuffs on people,” Bogucki said. “The arrest stats, the number of laws we enforce—that’s what the media runs with. Not the cop that buys a homeless guy a cup of coffee. That’s public service, that’s policing.”

Public service was precisely what Bogucki had in mind the first time she went to the Washington Corrections Center for Women (WCCW) in Gig Harbor, Washington, eight years ago. As a police officer and a member of SPD’s Youth Outreach Unit, Bogucki partnered with Girl Scouts Beyond the Bars—a visitation program for incarcerated mothers and their children.

During that first visit, Bogucki asked a group of women in the program one key question: “If there was something someone could have said or done that would have changed the path that led you here, what would it have been?”

One of the mothers in the program, Renata Abramson, took the conversation a step further and began collecting written responses to the question from other women in the prison. The exercise not only allowed the women to reflect on their path into the criminal justice system, but also illustrated how increased support from law enforcement and community-based organizations could help deter young people from entering the cycle the women had stepped into.

Those responses became the foundation of the IF Project—a collaboration between law enforcement, community members, and currently or formerly incarcerated people—which facilitates writing workshops for incarcerated men and women, a reentry mentoring program for incarcerated women, and programs for at-risk youth. Bogucki and her team first engage program participants while they’re incarcerated, continuing those relationships often years after a person is released into the community.

This month, a feature-length documentary called The IF Project, which tells the stories of four women who participated in the writing workshop while incarcerated at WCCW, was screened at the Brooklyn Film Festival. The film captures Bogucki’s personal commitment to each woman, and the role her mentorship continued to play as the women reentered society and faced struggles related to motherhood, addiction, and personal identity outside the confines of WCCW.

“When we first started this, it was about getting kids to ask for help and not following in their mother’s footsteps,” said Bogucki of her initial involvement in Girl Scouts Beyond the Bars. “The women went into it wanting that. They didn’t realize that it would change their lives and we would actually be constructing something to help them succeed using their own strengths when they got out, not necessarily the strengths we think they should have.”

With the help of a 2015 Second Chance Act Adult Reentry Demonstration Program grant, and in conjunction with SPD, the IF Project is further sharpening its focus on reentry by building a center for women returning to King County, Washington, from prison. The reentry center is part of a pilot program designed to support 84 women per year as they transition back into society using the tools they’ve gathered from IF’s writing workshop, mentoring program, and health and wellness and reentry curriculums. Reentry center staff will also connect the women to outside programming and services, and although it will not be a live-in facility, Bogucki hopes that it will provide women with the sense of community many of them grew to appreciate while incarcerated.

“Being in a women’s prison is very different than being in a men’s prison. When they reenter society, many of these women are being taken out of a supportive, family-living environment,” Bogucki said. “We want the reentry center to be a place where they can come back together and say, ‘We all have something in common; we’ve all been to prison.’ That peer-to-peer connection starts empowering them and lets them help each other create a safe place where they can have the conversations they can’t have with the outside world.”

While the reentry center will allow Bogucki and the rest of the IF team to expand their reach and ensure that more women stay engaged in programs and services after release, Bogucki is determined to continue growing the project in incremental, smart, and sustainable ways.

“I never want to get so removed from the process that I’m not in the trenches,” Bogucki said. “We do want to replicate this on a national level, but we never want to get so big that we lose connection with the women that are coming through. Even if it’s just five minutes that I get to spend with someone, because I’ve run into people who’ve changed my life in five minutes.”

For Kathlyn Horan, the film director who spent eight years making The IF Project documentary, the most valuable part of staying engaged with the women in the program is the ability it gives her to amplify their voices and create a national conversation about women who are involved with the justice system. Women are the fastest growing subgroup of the incarcerated population, increasing at nearly double the rate of men since 1985.

“We’re at a unique time right now where both people who are incarcerated and police officers are considered the ‘other’ and are viewed with some level of disdain,” Horan said. “There’s an opportunity to show that something can work and there is a possibility for a new way of policing.”