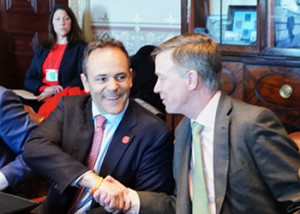 The White House, joined by a bipartisan pair of governors, led a discussion today with executives from large and small businesses on the challenges and benefits of hiring people who have criminal records at a time when workers are in high demand and the labor pool is shrinking.

An estimated 70 million adults in the U.S.—equivalent to about 30 percent of the nation’s population—have a criminal record. While many have marketable job skills, people who have criminal histories are frequently unable to find and keep a job for a variety of reasons, including about 20,000 job-related statutes and regulations across the country that limit their hiring opportunities.

“For the more than 10 million people returning to their communities from prison and jail each year, securing and retaining employment is a critical part of ensuring they successfully reenter society,” Gov. Bevin said.  “It is important for states to partner with businesses in order to eliminate barriers to employment and implement policies that provide a second chance.  We have a moral and societal obligation to help our fellow citizens reenter our communities as productive, law-abiding citizens.” 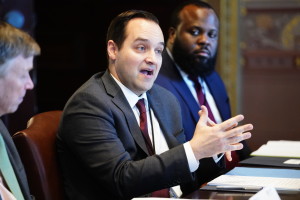 Policymakers across the political spectrum have embraced the need to hire people who have criminal records, citing its proven benefits in strengthening the workforce and bolstering public safety by reducing recidivism. Recent legislative solutions that ease restrictions around considering candidates who have criminal records include “Ban the Box” policies, record sealing, and expungement. As of 2016, 24 states and more than 100 cities and counties have enacted fair-hiring policies, and eight of those states’ statutes apply to both public and private employers.

“Despite recent progress, many returning from incarceration face more closed doors than open ones,” said Gov. John Hickenlooper. “Addressing this issue will take more collaboration between policymakers and businesses to find sensible, innovative solutions. I encourage others to join this conversation on how we can best equip formerly incarcerated people with the tools to stay away from a life of crime by leading meaningful lives.”

The willingness to break down barriers to employment for people who have criminal records is more apparent than ever in the private sector, as well. With the Equal Employment Opportunity Commission’s release of guidance on the consideration of criminal records in hiring decisions, the proliferation of state and local fair-hiring initiatives, and the growing need for qualified candidates in the workforce, businesses across a range of industries have changed their hiring practices and are now starting to see success, illustrating that people who have criminal records can be dedicated and productive employees.

“We looked at the ratings of our drivers with criminal records compared to drivers without a record, and they're essentially identical," said Malcom Glenn, Uber's Strategic Partnerships Manager. "That speaks volumes, as we've known that making the process to become an Uber driver fairer was the right thing to do, and we see that it's also good business. Now we're focused on how we can expand on this work, as well as encourage other companies that this is good business for them, too."

Johns Hopkins Health System has also adopted a willingness to eliminate these barriers to employment, hiring nearly 500 people who have criminal records from 2009 to 2012—about 10 percent of its overall hires during that period. According to the company, those employees had virtually no difference in their retention rate during that period than their colleagues without criminal records—69 percent and 71 percent, respectively. 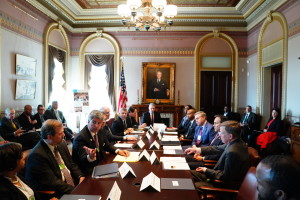 Putting People with Criminal Records to Work, taking place in the Eisenhower Executive Office Building in the White House complex.

“Johns Hopkins has taken a safety-first approach to this issue, and we’ve seen great results, with great employees contributing to the work we do, while also contributing to the society,” said Yariela Kerr-Donovan, the company’s senior director of Human Resources. “Some companies are preventing themselves from even considering people who could become some of their most valuable and dedicated employees, and in doing so, are ensuring those individuals will have a higher hill to climb to prove they’re worthy of a second chance.

With the nation’s unemployment rate at its lowest in a decade, businesses in a variety of industries are experiencing fierce competition for qualified candidates, leading to more companies easing their consideration of criminal records in their hiring decisions.

As part of the roundtable discussion, the CSG Justice Center also announced plans to bring the insights and strategies from the roundtable discussion to states that need further guidance on creating more pathways to employment for people who have criminal records. The CSG Justice Center will announce the selected states for the initiative later this year.

“Ask a person in prison or jail to name the most important thing they need to succeed in the community when they’re released. The response will almost always be the same: ‘I need a job,’” said Georgia Supreme Court Justice Michael J. Boggs, who also serves as a board member for the CSG Justice Center. “To address this universal need, discussions like the one we had today need to continue at the local level in order to see real changes, including identifying and eliminating public- and private-sector barriers that prevent people from work.”

Putting People with Criminal Records to Work: A National Business Roundtable was made possible with funding from the John D. and Catherine T. MacArthur Foundation and its Safety and Justice Challenge.

“Today’s discussion marked another important step in finding forward-thinking, local solutions to help reduce our nation’s incarcerated jail populations,” said Laurie Garduque, Director of Justice Reform at the MacArthur Foundation. “Joblessness is a key contributor to people cycling in and out of jails so frequently. Engaging businesses in these issues, and finding new ways to connect them to local government efforts is a pivotal part of re-thinking our local systems.” 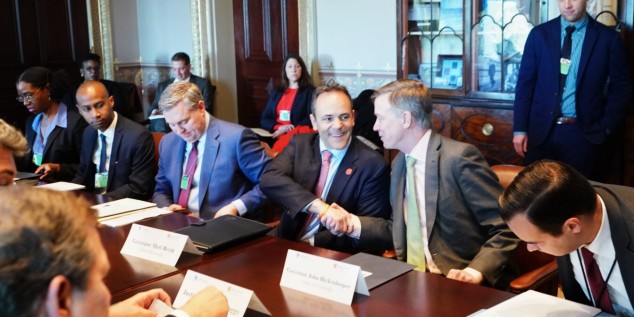 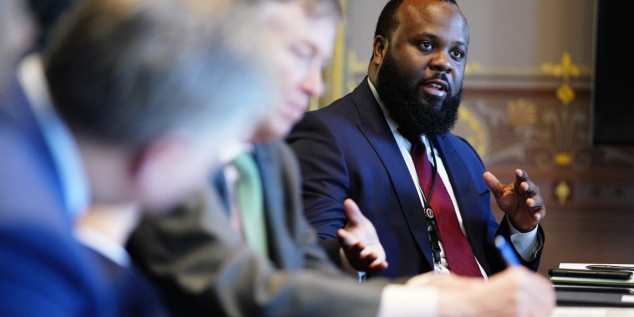 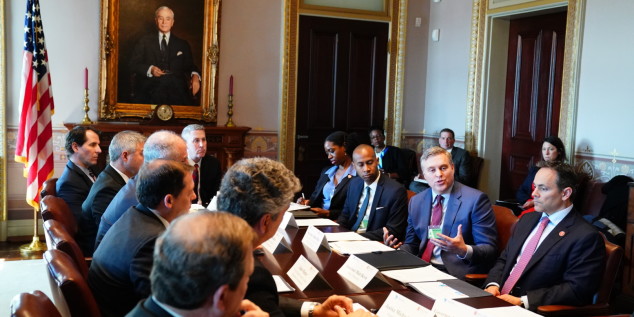 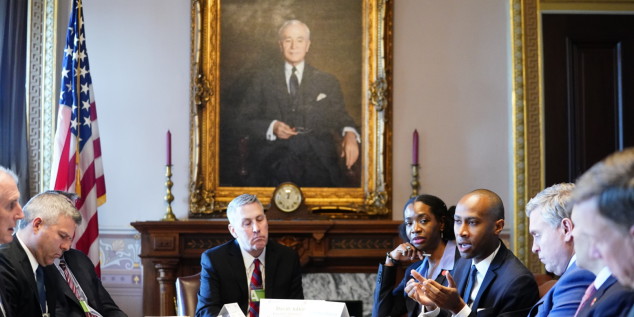 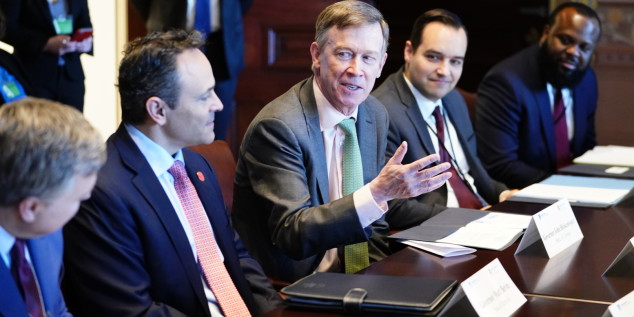 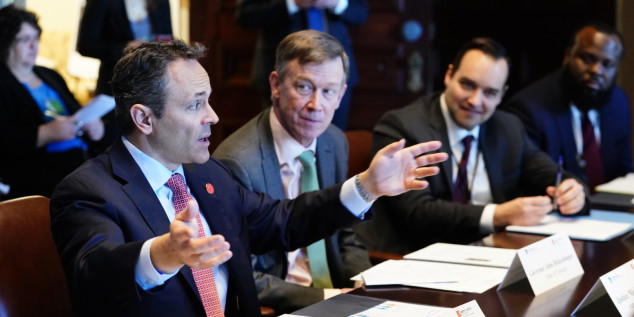 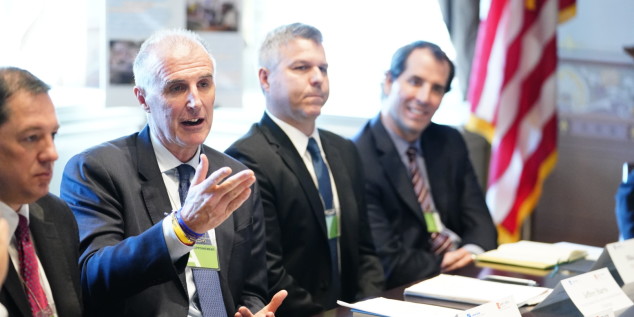 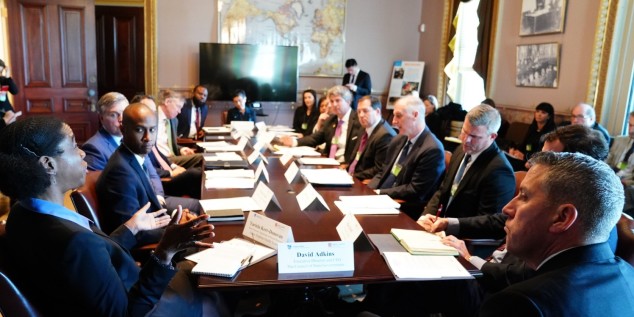 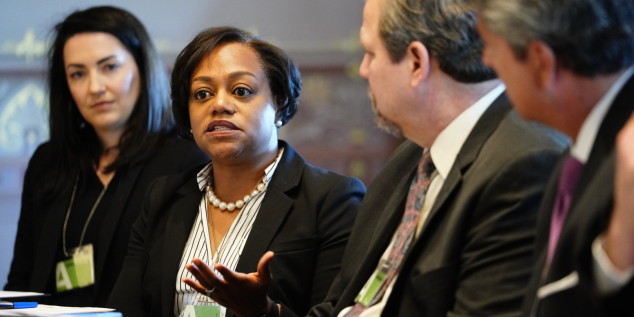 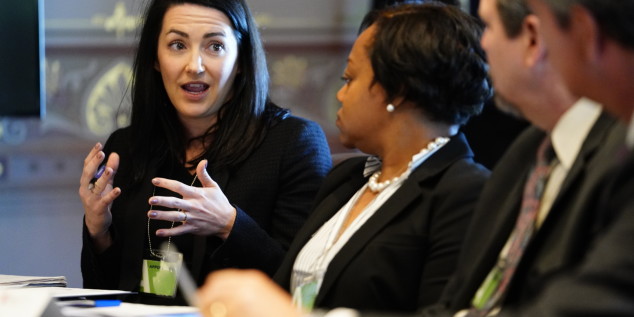