When change came to the Iowa Department of Corrections (DOC), then corrections officer Ernie Galbreath was on the ground watching it happen.

Galbreath joined the DOC in 2013, where he supervised people at the Newton Correctional Facility outside of Des Moines. That same year, Iowa was in the planning phase of its Statewide Recidivism Reduction (SRR) program, an intensive Second Chance Act grant funded by the U.S. Department of Justice’s Bureau of Justice Assistance. The SRR track aims to help states create a sustainable, multifaceted approach to reducing recidivism among people leaving state prisons.

Iowa’s SRR planning phase entailed an in-depth assessment by DOC leaders, who examined how resources were being spent, whether operating practices were consistent, and what the  overall culture among corrections staff looked like. They sought to foster an environment that would be conducive to carrying out a system-wide recidivism-reduction initiative.

To gauge Iowa’s existing correctional culture, DOC leaders requested input directly from corrections officers about what practices were working best—a way of walking in the footsteps of the officers.

After the assessment results were in, department executives were able to pinpoint what their corrections officers could be doing more to help reduce recidivism: respond consistently to violations; increase the usage of risk and needs assessment to inform decisions; and engage in cooperative and positive social interactions with people under their supervision.

So when Iowa received further funding to implement its SRR plan in 2014—up to $3 million over three years—it was clear that one of the first priorities was to institute comprehensive training for all corrections officers. Through a “Core Correctional Training” course, the Iowa DOC trained every officer to approach their interactions with clear real-time considerations and new interpersonal skills. And according to Galbreath, the development of these skills has had an impact. 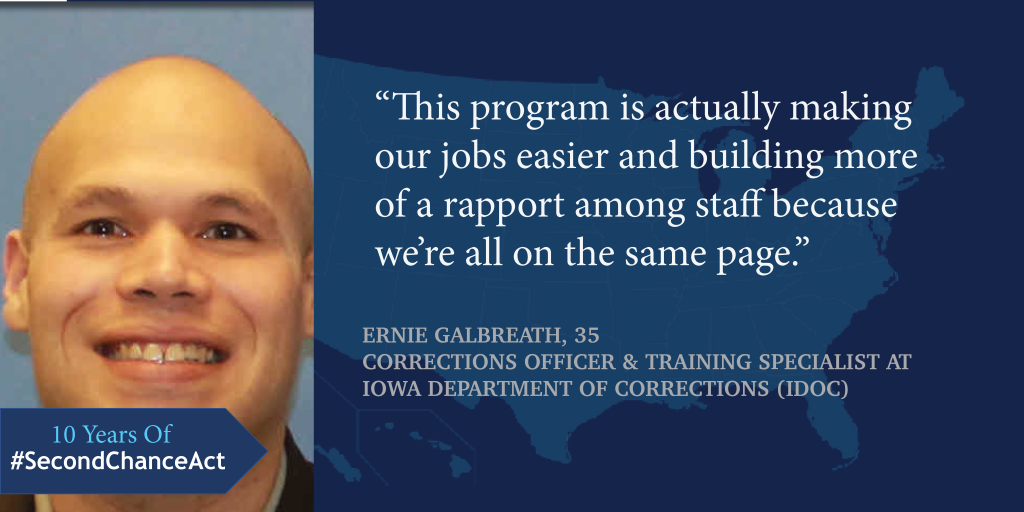 “Our entire climate as an institution has changed,” Galbreath said. “And it’s a very good change.”

Prior to the implementation of the SRR program, even a minor infraction could result in many different outcomes.

Officers were left to handle such infractions independently, Galbreath said; how they spoke to the person committing the violation was up to them, as was any resulting punitive response. At no point were officers prompted to consider a person’s evaluated risk of recidivism and needs in their decision making.

Since the implementation of the SRR program, that isn’t the case anymore. Officers now consistently use a predetermined set of responses and communication methods that aim to encourage prosocial interactions between corrections officers and those in custody.

Galbreath, now a training specialist, teaches both incoming and veteran officers at Newton in the same techniques he initially learned as part of the SRR grant. Through activities such as role-playing, corrections officers get the chance to practice implementing prosocial interactions. From his observations, Galbreath said that acting as the person in custody has an immediate benefit for corrections officers “because it pushes them to empathize” with the incarcerated person’s perspective.

“You can almost see them have a moment of understanding when they’re in the midst of these role-plays,” he said.

All of the approximately 145 corrections officers in Newton are now trained in accordance with principles of the SRR program, and other facilities have followed suit. Even the most experienced officers have been receptive to the training, Galbreath said, especially because the techniques aren’t necessarily newfangled.

“They often say they realize lot of things taught in these classes are things that officers who have been considered really effective and looked up to for years have been doing already,” he said.

Iowa is just one of 14 states which have used or plan to use this intensive, collaborative process. Among SRR states’ highest priorities is to implement evidence-based practices across corrections, probation, and parole.

By focusing the job of corrections officers on reducing recidivism, the Iowa DOC aimed to use resources in the best way possible, ensure that correctional practices were based on evidence, and track outcome data, all of which reflect core tenets of the SRR program. And while Galbreath and his colleagues were training officers, other big changes in the Iowa DOC were also underway as part of the SRR program; what has happened in the agency since 2013 is described by those who work there as a systems-change transformation.

Across the state, all programs used by the Iowa DOC — from cognitive treatment to group activities — were evaluated to determine whether they aligned with evidence-based practices for reducing recidivism. Of the more than 200 DOC programs available, 73 were eliminated for failing to meet these criteria, and resources were redistributed to effective programs accordingly. In addition, risk and needs assessments are now widely used throughout the agency, and corrections officers have learned to rely on their results rather than overlook them, a sign that the evidence-based assessment has been firmly embraced to make determinations about interventions and violation responses..

The SRR program has been instrumental in shifting agency dialogue toward reducing the likelihood of people recidivating, Galbreath recounted, and has organically prompted discussions between staff and residents about how to prepare for their return to communities after prison.

“These conversations are happening much earlier, long before their release date. And on a daily basis, too. . . . That’s been a part of these core correctional practices, to get them thinking about how they’re going to get out there and make it, so to speak, and live the positive life they say they want to lead,” Galbreath said. “[And it’s] because of the emphasis [SRR] has on reducing recidivism, the short- and long-term ways to reduce recidivism.”

That alone would be significant enough, Galbreath said, but this new attitude has also had a profound impact on the work lives of his colleagues in corrections, a significant step for those in a field known for its significant physical and mental health risks.

“There’s more positivity in the environment because people are more respectful, they’re more approachable, they’re more likely to use problem-solving skills before physical violence,” he said. “This program is actually making our jobs easier and building more of a rapport among staff because we’re all on the same page.”