Reforming A System: An Inside Perspective on How Ohio Achieved a Record-Low Recidivism Rate

By Gary C. Mohr, Director of the Ohio Department of Rehabilitation and Correction 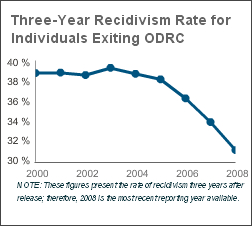 EDITOR'S NOTE- In late 2010, Ohio’s prisons were 33 percent overcapacity and projected to grow by another 3,000 people over the next four years. State leaders from across the political spectrum came together to tackle this problem—and by June 2011, enacted a policy framework (incorporated into House Bill 86) that reduces spending on corrections and increases public safety.

Now, less than two years later, Ohio’s recidivism rate is the lowest it’s been since the state adopted its current measurement in 1991. By implementing HB 86, the state hopes to avert the projected prison population growth and thereby avoid an estimated half-billion dollars in additional spending. The new statute will also ease prison crowding as the population gradually declines to levels last seen in 2008, generating $46 million in marginal cost savings by 2015.

In this article, Director Gary Mohr, the head of the Ohio Department of Rehabilitation and Correction (ODRC), describes how his agency has helped drive down Ohio’s recidivism rate by realigning its policies to focus on reentry and advance the goals of HB 86.

As Director Mohr discusses, HB 86 emerged from a process of extensive data analysis and stakeholder engagement. Using a “justice reinvestment” approach, Ohio received over 18 months of intensive technical assistance from the Council of State Governments (CSG) Justice Center (which coordinates the National Reentry Resource Center), in partnership with the Pew Center on the States and the U.S. Department of Justice’s Bureau of Justice Assistance (BJA). Throughout this process, officials are exploring strategies for capitalizing on the efforts of the state’s 27 Second Chance Act grantees — which include Director Mohr’s agency. With continued resources and support, state leaders are now working with the CSG Justice Center, Pew, and BJA to effectively implement HB 86 (in what is known as “Justice Reinvestment Phase II”).

“The drop in Ohio’s recidivism rate is due to the bipartisan work of the state legislature, Governor Kasich, Ohio’s reentry leaders and the success of programs made possible at the federal level by the Second Chance Act,” said U.S. Senator Rob Portman, the author of the 2004 Second Chance Act (when he served in the U.S. House of Representatives).

“Ohio, like many states, is struggling with high unemployment and tight budgets,” Sen. Portman continued. “That’s why it’s great to see this program help offenders become productive members of society, while reducing costs to taxpayers. I commend Director Mohr, Governor Kasich and other state leaders involved in Second Chance for their commitment to effective prisoner reentry programs that improve communities and save taxpayer dollars.”

The Ohio Department of Rehabilitation and Correction (DRC) looks drastically different than it did one year ago. As 2010 came to a close, Ohio’s prison system was bursting at the seams with nearly 51,000 inmates. Prison violence was staggering while at the same time the agency, as well as the entire state, was facing unprecedented budget cuts. Some would question why a retired warden would want to come back to public service to lead an agency riddled with issues of this magnitude. For me, the answer was simple. Governor John Kasich wanted to reform and stabilize Ohio’s prison system and reduce the impact of criminal behavior on Ohioans. That challenge was too important for me to turn down.

How was this possible? In short, by relying on the increased use of evidenced-based practices and modifying reception assessment process, processes for identifying treatment needs for offenders under supervision, and our prison’s classification systems, Ohio is seeing fewer offenders return to prison and a greater return on our investments.

In 2010, 46 percent of offenders who entered Ohio’s prison system served sentences of one year or less. These offenders spent most of their time in reception centers where they did not have access to rehabilitative programming, and many were released without supervision. Last year Ohio passed House Bill 86, the most significant sentencing reform package in the state’s history. The new law aims to reduce crime by diverting first-time, non-violent offenders to intensive community programming and away from the corruptive influence of career criminals in Ohio’s prison system. The law also aims to reduce overcrowding and incidents of prison violence and to better prepare inmates for a successful reentry back into the community. 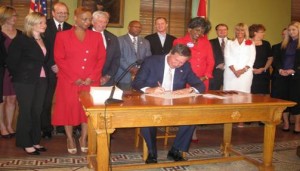 While the impact of sentencing reform is beginning to translate into a smaller inmate population, DRC is currently transforming the entire prison operation to a unique three-tiered system aimed at reducing violence and increasing opportunities for positive change—thus decreasing the likelihood that offenders commit new crimes following their release from prison. Once fully implemented, every inmate will be placed in one of these three tiers.

An inmate can work his or way up or down these three tiers, based on individual behavior. Not only does this system give offenders a sense of hope; it also encourages pro-social behavior and participation in meaningful programming by offering incentives and privileges, such as a less restrictive environment, recreation and visitation opportunities, and increased commissary rights.

In addition to developing a three-tier prison system, DRC is reinventing how its units are managed within the prison walls. Unit management will increase the face-to-face contact offenders have with unit staff. The staff will assist them with their day-to-day issues before these issues become problematic. Coupling the three-tier system with enhancements of unit management will increase offenders’ readiness for release and decrease the number of violent incidents taking place within Ohio’s prisons.

Ohio’s criminal justice reform efforts expanded even further when in November 2011 DRC hosted a forum examining the impact of collateral consequences on people returning from prison or jail or sentenced to a term of community supervision. The first of four such meetings, the forum brought together criminal justice professionals, lawmakers and other key stakeholders. Over the course of several months, participants have identified five strategies to effectively reduce or eliminate barriers to returning citizens finding employment: 1) Clearly identify the magnitude of collateral sanctions that currently exist in Ohio law and policy; 2) Address collateral consequences relating to license suspensions, infractions, and indigent fees; 3) Develop an order of limited relief; 4) Focus on fair hiring practices; and 5) Modify child support orders and processes for offenders subject to license suspension due to non-payment of child support. A sub-group is also considering the impact of collateral consequences for juveniles involved with the criminal justice system.

Through input from various stakeholders, participant workgroups have developed and continue to refine recommendations to address collateral consequences. These recommendations will soon translate into policy and legislative language that will remove or significantly reduce the barriers offenders face in finding gainful employment. The connection between employment and the reduction of recidivism cannot be overstated, and these efforts will positively impact that correlation.

Ohio is quickly and steadily transforming and changing its criminal justice system—and we are already seeing dramatic returns on our investment. While these changes will impact many areas of the system, the most significant impact will be seen as DRC refines its mission surrounding these reforms – to reduce the number of offenders returning to prison and to decease crime in Ohio. This truly is a win/win situation for all Ohioans.