Palm Beach County Program Partners with Probation Officers to Improve Reentry, One Youth at a Time

By Cynthia Thaler and Katy Albis 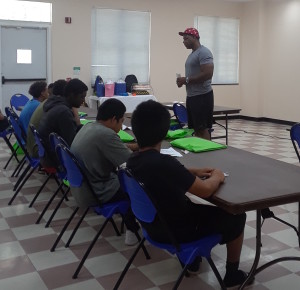 A Palm Beach County probation officer speaks with youth under his supervision about the importance of reentry services.

Steven’s path to college had a few detours. As a child, he was in and out of foster care, and at 17 he was placed in a Florida Department of Juvenile Justice (DJJ) program after getting involved with drugs and stealing.

“It took me getting in trouble to realize life is short,” Steven recalled when writing about his own experience in the juvenile justice system.

While he was in placement, Steven joined Back to a Future (BTAF), a youth reentry program whose staff helped him make a plan to attend college.

“The Back to a Future program has been a blessing to me,” Steven said in a video that highlighted his experience. “I was the first of my [friends] to even go to college.”

The BTAF program, based in Palm Beach County, has worked in close collaboration with probation partners at the Florida DJJ since its inception in 2013. Operating under the umbrella of Palm Beach County’s Department of Public Safety, BTAF serves moderate- to high-risk youth under the age of 18 who are returning to the county from residential commitment. The program is intended to complement the role of probation supervision by providing case management, job skills training, education transition services, and referrals to other needed supports for youth like Steven, who each have their own specific needs and goals.

“We’re telling [the probation agency] that a case plan or a transition plan should be individualized,” said Shahzia Jackson, the county’s former reentry program coordinator. “That may not have aligned with their [previous] policy of ‘make sure every youth does this.’”

From the start of the program, staff at BTAF adopted practices to gain buy-in from probation staff and make them integral partners in the reentry process. BTAF’s collaboration with probation begins the moment youth are enrolled in the program while they are still in the facility and continues after youth are released into the community. The length of each youth’s post-release participation in BTAF varies depending on the needs identified in his or her respective reentry plan.

“We include [the probation officers] on everything [so that] they don’t feel like they’re a separate part of the process,” Jackson said.

“[BTAF] helps curtail the … recidivism that probably would take place, because now the youth has an opportunity not only to get services but to be a part of prosocial events and activities,” he said.

Probation officers from the reentry unit, BTAF staff, an education liaison, and representatives from other relevant agencies meet monthly to discuss program policies and protocols. The meetings also serve as a forum where probation officers and others are able to raise issues or challenges they might be having while working with youth. Meeting agendas are distributed to all parties in advance to solicit feedback and ensure that any concerns are addressed. There is one supervisor present at each meeting, but the rest of the attendees are line staff who actually work with youth participants on a regular basis. Plus, Jackson added, the meetings are always held at the probation office to accommodate the schedules of probation officers, who are often swamped with court appearances and other duties.

“[The meetings are] a chance for everyone to form a relationship and speak honestly about what’s going on,” Spatara said. “No one is posturing for their agency. It really is all about the kids.”

In addition to these larger program meetings, probation officers and BTAF transition specialists engage in monthly case review meetings to discuss individual youth’s needs and progress toward post-release goals. Transition specialists communicate regularly with probation officers between scheduled meetings to keep them informed of youth’s successes and troubleshoot any challenges.

The partnership between BTAF and probation staff has been “nothing but a benefit to us … and the youth that we serve,” Rathell said.

Jackson’s advice for other reentry programs that are seeking to engage a corrections or probation partner is to utilize the wealth of knowledge that officers have and to consistently involve them so that they have ownership over the program and feel personally connected with participants.

“[Probation officers] know a lot about the youth, more than I’ve ever seen,” she said, noting the changes she’s observed over the years since BTAF was launched. “Before, the discussion used to be more around violations [like] ‘he didn’t come home on time.’ Now I see more of ‘I noticed he’s having trouble in school, what can we do to work together to help him with that issue?’”