From Jailhouse to Coffeehouse, SCA-Funded Program Supports People in Omaha During and After Incarceration 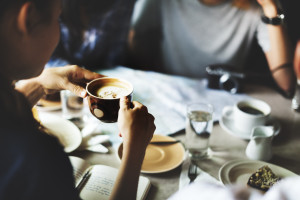 Several days after Cortney was arrested on drug charges in October 2016, she called her mother from Nebraska’s Douglas County Correctional Center. They hadn’t been in contact since a police task force came to her mother’s home to arrest Cortney. As the two spoke, the fear Cortney recalled seeing on her mother’s face during her arrest gave way to something much more somber, she said.

“I heard in her voice how down she was and what this last time in jail was doing to her—she was depressed,” Cortney said. “Pretty much my whole family had given up on me; I’d given up on myself. That’s when I thought, ‘I have to do something to change this.’”

During the year leading up to her October arrest, Cortney had been in jail four times. Each time she was released, she found herself eventually returning to drug use, which inevitably led to another arrest and another stint in jail.

“I just wanted to get out each time—I thought I was healed after a month in jail,” Cortney said. “But once I was out, I’d always ask myself why I hadn’t learned anything. I never really understood what reentry meant until I asked for help.”

Cortney heard from her peers in jail about the Matrix Intensive Outpatient Program (IOP), where people with co-occurring substance use and mental disorders receive individual and group therapy, relapse-prevention services, family and social support interventions, and intensive case management.

The Douglas County Department of Corrections and the Community Mental Health Center (CMHC) received a 2014 Second Chance Act (SCA) Reentry Program for Adults with Co-Occurring Substance Abuse and Mental Disorders grant to operate IOP. IOP specifically targets women who are incarcerated, people returning from incarceration to high-crime neighborhoods, and people who have been in the justice system and who are homeless or at risk of becoming homeless. IOP includes 10 weeks of structured programming and 36 weeks of continuing care. So far, more than 60 people have graduated from the program with graduation ceremonies now taking place on a weekly basis. To accommodate more participants, IOP staff recently expanded the program to serve one group of participants during the day and another at night.

To be considered for the program, Cortney first had to ask correctional staff to connect her to a CMHC case manager who then gave her a substance use and mental disorder assessment. Once she was deemed eligible, Cortney was placed in the jail's Reentry Assistance Program to take classes, participate in therapy, and attend church or Alcoholics Anonymous meetings, among other activities.

After her first few weeks in IOP, Cortney saw tangible changes in herself as she embraced the idea of recovery. She reestablished contact with her family, made new friends, and began the process of reinstating her cosmetology license so she could gain employment upon her release.

“My mom said, ‘Gosh, it’s like having the old Cortney back,’” Cortney said.

Cortney graduated from IOP and was released from jail in February. She is now working to put into practice everything she learned through the program. And while she’s no longer in the correctional facility, she won’t be alone in her recovery.

IOP counselors and case managers facilitate a voluntary “coffee chat” for program alumni, who gather at a local coffee shop once a week and talk through the struggles and successes they’re facing in recovery. Often a dozen or more alumni will attend the chats to lend support to their peers and share stories from the week.

“On those days where they aren’t doing great, their peers who’ve gotten to know them at the coffee chats will say, ‘Hey, what’s going on? Is there anything we can do to help?’” said Whitney Johnson, a CMHC case manager who often sits in on the weekly gatherings. “And there’s this feeling of accountability to each other, so they’ll open up, whereas before they might’ve just said nothing and gone home.”

The coffee chats were not initially part of IOP; they came about as an optional, supplement of the program when staff began to recognize that graduates often face unforeseen challenges in the community that they need continued peer support to tackle successfully.

“Now we’ll even allow some participants to go down and visit the coffee chats before they’ve actually graduated, so they can see the community they’ll have access to when they’re out,” Johnson said. “It’s one of the things we feel most proud of.”

Without fail, Rich has attended IOP’s alumni coffee chats every week since his program graduation and release from jail in September 2016. The relationships he’s built with fellow program graduates—including Cortney, who now regularly attendees the chats—are the biggest reason for his continued commitment, he said.

“I’ve been in and out of jail for the last 20 years, and this [group] taught me it was time to grow up and stop doing the things I was doing,” Rich said. “Having people who care about how you’re doing and who can lift your spirits is important.”

But Rich has not always been able to open up in group settings like the coffee chats, he said. His confidence began to grow when he started IOP and attended individual sessions with CMHC therapist Jean Troxell, who helped him discuss his personal challenges with his drug use and his behavioral health needs.

After graduating from the program and leaving jail, Rich sought to continue making permanent changes in his life. With help and support from IOP staff and his peers, in the more than six months since his release from jail Rich has maintained employment, reconnected with his family, secured housing, and gotten his driver’s license back.

“Rich felt pretty hopeless when he first came to IOP; he was discouraged,” CMHC therapist Shy Meckna said. “And now you can just see the difference on his face. This is the first time in 13 years he’s been sober, so he’s got a lot to look forward to. He’s not letting any grass grow under his feet.”
Related Content
FY 2023 Improving Substance Use Disorder Treatment and Recovery Outcomes for Adults in Reentry
FY 2023 Second Chance Act Pay for Success Program
Smart Supervision Program (FY 2023)
FY 2023 Second Chance Act Smart Supervision Program
Bureau of Justice Assistance Releases FY 2023 Reentry Funding Opportunities