By The Council of State Governments Justice Center Staff 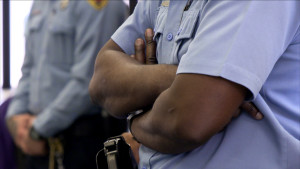 It’s widely known that jails and prisons can be violent and stressful places to work. But the well-being of corrections officers, while a priority for corrections departments across the country, has rarely been the subject of formal study.

This is a gap that Dr. Amy Lerman at the University of California, Berkeley; the California Correctional Peace Officers Association (CCPOA) union; and the CCPOA Benefit Trust Fund aim to fill.

“We started this project because we want to better understand the impact of the work environment on our members and the research wasn’t there,” said Stephen Walker, director of Governmental Affairs for the CCPOA union.

In 2017, Lerman and her team at Berkeley started surveying corrections officers across the state of California. The first wave of results included a sample of 8,334 corrections officers and other sworn peace officers representing all of the state’s correctional institutions and parole offices; it paints a vivid picture of how exposure to violence and work-related stress impact the health and well-being of officers.

Results from the survey suggest that corrections officers are exposed to violence at significant rates. Twenty-nine percent of corrections officers reported being seriously injured at work, and 85 percent reported seeing someone else seriously injured or killed in the workplace. As Lerman’s work bears out, this exposure to violence can come with a host of negative repercussions.

For instance, approximately 50 percent of all officers in the sample reported that they rarely feel safe at work. Those officers reported a higher incidence of digestive issues, high blood pressure, diabetes, and heart disease. In an occupation where stress-related physical illnesses are already higher than average, the added psychological stress of not feeling safe at work can coincide with alarmingly high levels of burnout, depression, suicidal ideation, and suicide attempts. 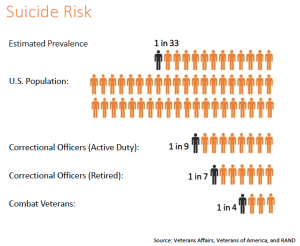 Officers' reported prevalence of suicidal ideation as compared to other populations. Chart used with permission from Dr. Amy Lerman.

The research that does exist in this area has shown that the risk of suicide is 39 percent higher for corrections officers than for people in all other professions, and officers themselves are beginning to share stories of on-the-job pressure that bleeds into their personal lives.

According to Lerman’s findings, this challenging work climate can also impact officers’ attitudes toward their jobs. Officers with at least one symptom of post-traumatic stress disorder (PTSD)—which amounted to one in three officers surveyed—are less likely to believe that rehabilitation should be a central goal of incarceration than officers without symptoms of PTSD. This suggests that agencies looking to implement rehabilitative correctional programs must consider the needs of officers, in addition to the needs of people who are incarcerated, if they want these programs to succeed.

“Officer wellness is not separate—or separable—from concerns about the safe and effective management of correctional institutions; it is at the heart of these concerns,” Lerman said. “Without a healthy workforce, ensuring the rehabilitation and care of [people in prison] is simply not going to be possible.”

Although the findings on the physical and mental well-being of corrections officers are concerning, Lerman’s research suggests several ways agencies might be able to promote officer wellness. When asked what resources they would like to have access to, more than 80 percent of officers said they were either interested or very interested in training on stress management, trauma or PTSD, and personal nutrition and exercise. These results are being used in California to test a number of low-cost behavioral interventions for officers that CCPOA representatives and Lerman hope can serve as a model for agencies throughout the country.

Despite the demand for wellness-related resources, the survey found that one in five corrections officers is concerned about the confidentiality of employee assistance programs that provide counseling or support on personal, financial, or legal issues. Walker suggests that agencies prioritize confidentiality while also emphasizing the need for candor.

“With any officer wellness program, we should encourage our officers to be honest and open about their feelings and experiences,” Walker said. “That’s the only way we will be able to address the issues they face.”